Meeple People is a comedy web series about a group of eclectic geeks in their 30s who come together for a weekly game night in a suburb of Ohio. While they have little in common professionally or personally, these social misfits find a true kinship through their love of strategy board games. It’s about shamelessly indulging in the joys of childhood, while learning how to embrace your inner grownup. And it’s about friendship, because when you find your people, you find yourself. 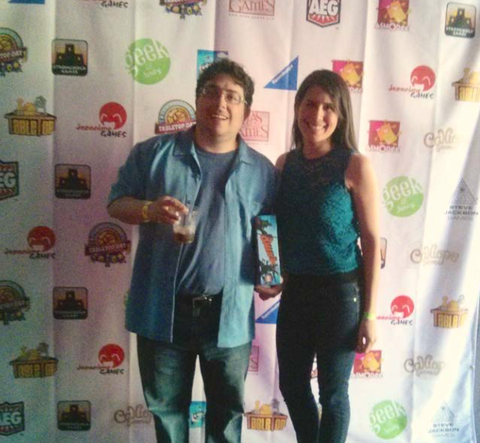 Dean Donofrio: Co-Creator/Writer/Director/Producer
A working screenwriter, playwright, director, producer and editor, Dean has enjoyed a successful career in entertainment for over 15 years. In addition to being a Nicholl finalist, he had two pilots place as second rounders in the Austin Film Festival, and was a quarter-finalist with Cinestory. Currently, he has two pilots in development, and his feature Whackjob was recently optioned. His work as a playwright has shown throughout Hollywood theatres, including The Blank, Elephant Stages and The Hudson, with a few of his plays also being adapted as short films. He is repped by Culture Creative Entertainment.

ErinRose Widner: Co-Creator/Writer/Producer
A screenwriter, actress and producer, her work has premiered at dozens of festivals including Method Fest, Dances With Films, LA Shorts Fest, and Marseille Web Fest. Additionally, she has appeared on Grey’s Anatomy, and alongside Christopher Lloyd, Cheyenne Jackson and Kevin Pollock in the film The One I Wrote For You. As a screenwriter, two of her pilots placed as second rounders in the Austin Film Fest, and she was also a Cinestory quarter finalist. She has two additional pilots, and a feature currently in development. She is repped by Culture Creative Entertainment.